Traveling is not something you’re good at. It’s something that you do. Like breathing.

Home » Blog » Traveling is not something you’re good at. It’s something that you do. Like breathing.

And so it begins 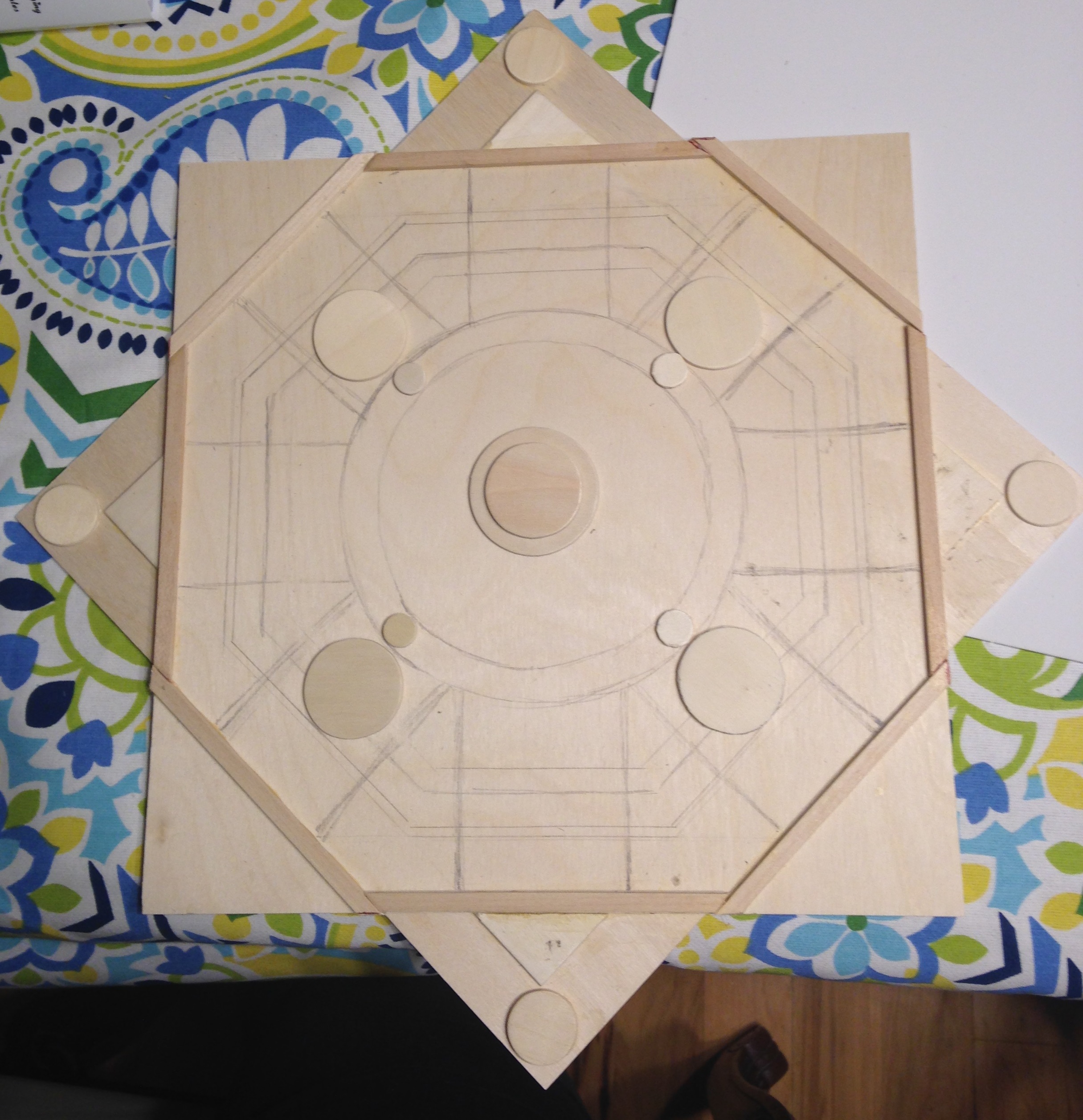 I started with two wooden plaques and glued them together.

After the glue dried I began sketching out the placement of the other raised wooden elements.

I wanted depth and dimension to the board rather than the flat, 2D boards that I saw when I was researching what others had done before me.

I drew these lines more times that I want to admit.  I swear, every time I opened paint, I was back to sketching the lines back into place. 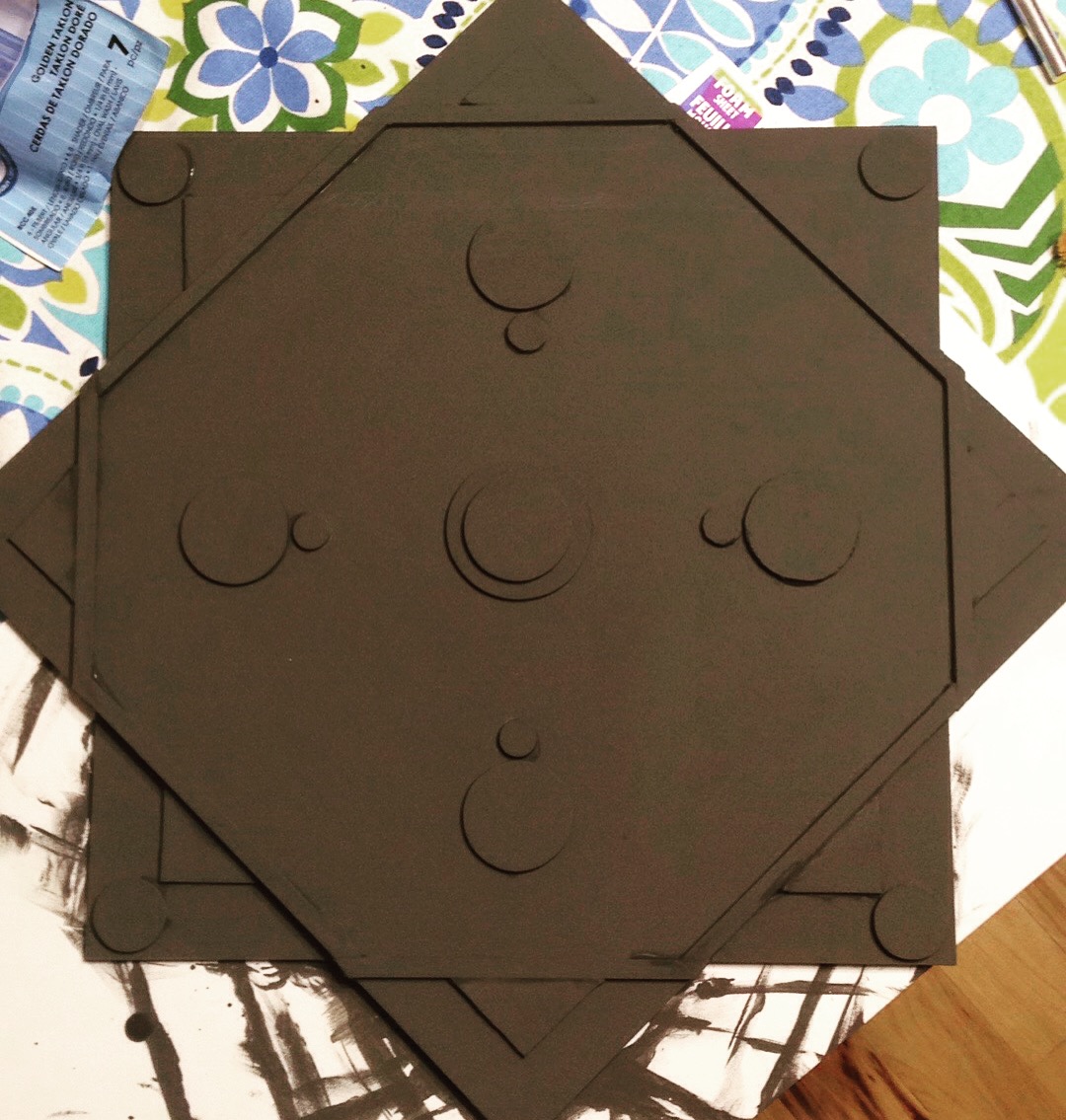 I went with this weird casin or milk based paint for the base coat.  I’m not really sure what in the world possessed me to buy and use it.

It ended up being a really bad idea as it absorbed into the wood and then sucked up all the paint that I put on over it.

So, lesson learned.  Don’t paint with your food.

Once the paint FINALLY dried, since it took forever on top of being annoying and milk stinky, I re-sketched the guiding lines of the board and pressed on. 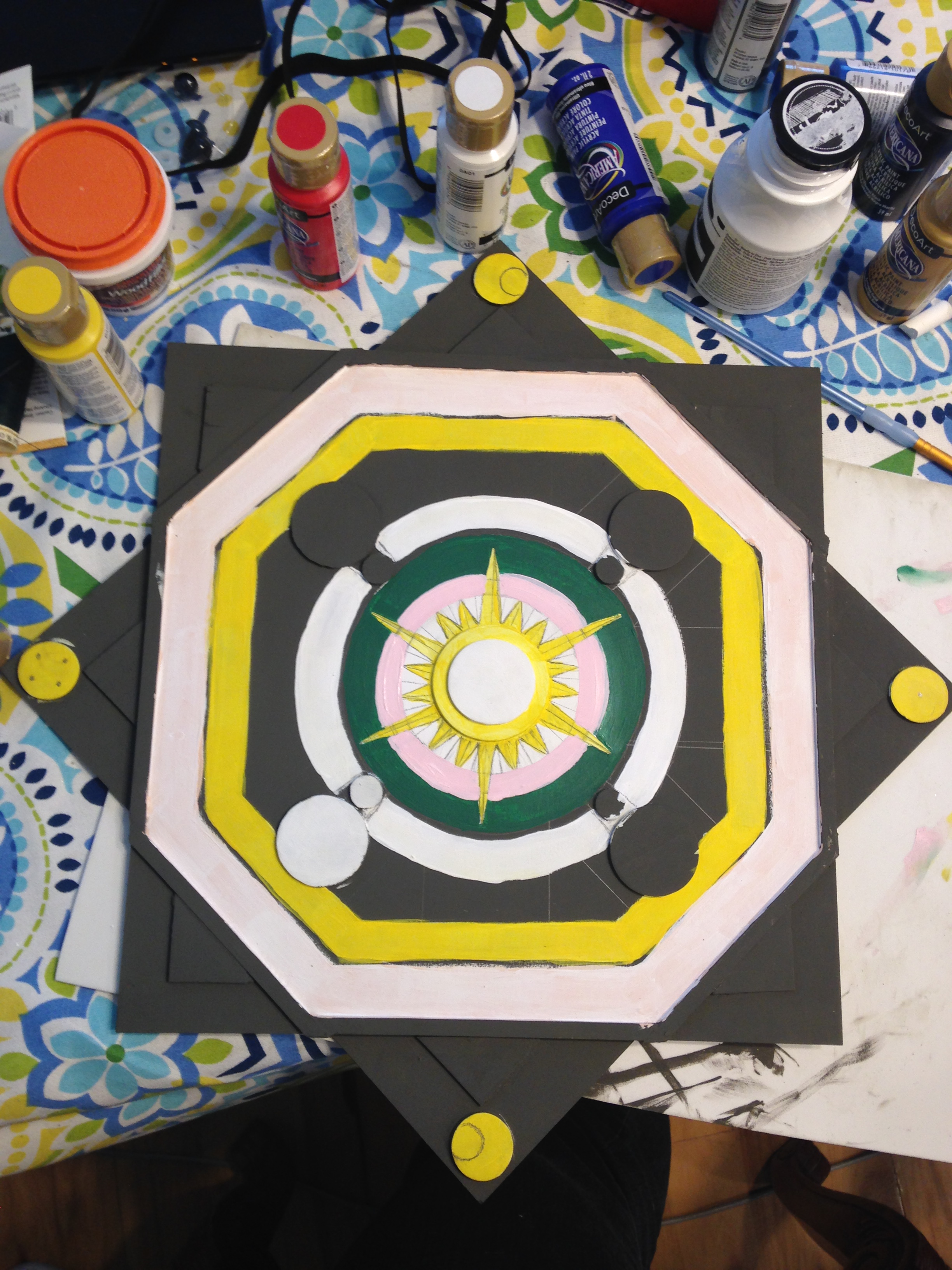 Here’s where I made another poor choice.  You see, I’m a Golden Acrylics kind of girl.  I’ve been horribly spoiled with them and I have a great collection of them!  They have a vibrant hue and pigment that I adore.

Regrettably.  Those delightful paints were 400 miles out of my reach and instead of waiting until I could go home and use them, I went out and bought cheap acrylics.

And I regret much.

On a side tangent, yellow is the WORST colour to build up.  Seriously, it’s so flimsy and it got eaten by the milk paint base in my case.

Thus, a white base had to be painted any place yellow was going to go.

So, pretty much the moral is – yellow sucks.  Doesn’t matter if it’s 99 cents or 7.99 a bottle.  It’s just a weak colour that needs babying.

Let’s talk Chinese for a moment.

I’ve ALWAYS wanted to know what in the world all of the symbols on his board meant.  Luckily for me, I have a handy, dandy, Chinese friend who is my bestie!  Thank the heavens she is patient with my odd requests and is REALLY GOOD at reading calligraphy.  Cause I would have been stabbing in the dark.  Like, badly stabbing.  Drunken style.

Contained within the board are as followed;

I have more detailed photos with scribbles but this flipping web thing wont let me post them.

And back to our original program… 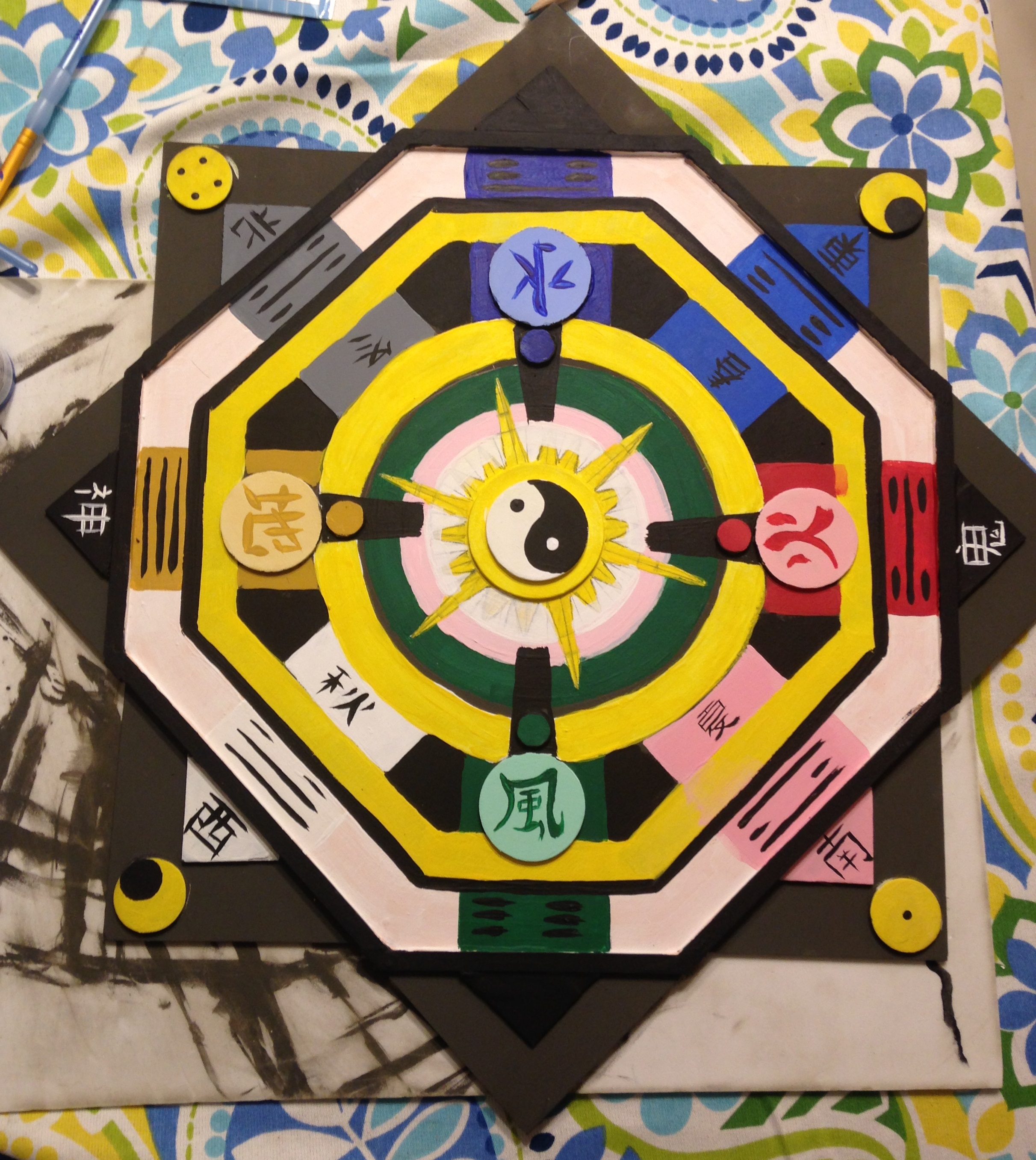 Not only did I find that horribly interesting, it made my calligraphy legible!

I have this thing about original sources.  Knowing BEFORE I just start scribbling blindly.

At this point, all of the colours and calligraphy have been blocked out and it’s finally beginning to look like the reference photo!

While it looks pretty darn close, there are hours to go before this is done. 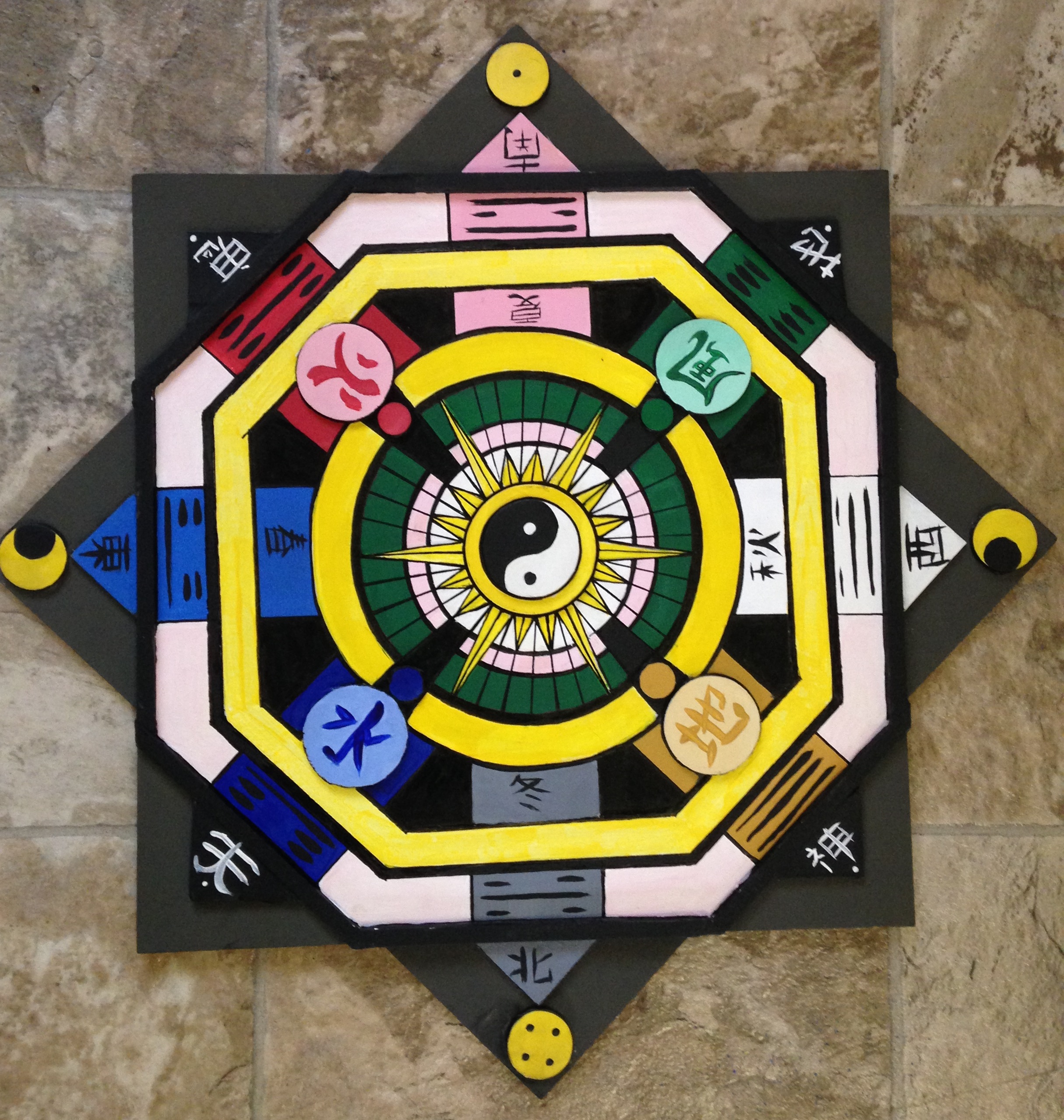 After about four mind numbing hours of TLC time with a detail pen and a ruler, this prop is ready to find Clow Cards!

It’s amazing to me how the details can really make something good into something great.

I honestly thought I was going to go crazy while doing this.  It’s a good thing I was kind of stuck doing it today.

After all is said and done, a dip into the gloss happened.  Everything looks great!  Except that blasted milk paint didn’t gloss.  It just ate it.  So I’m cutting my losses and hoping a few more coats fixes the problem.

“Maybe the journey isn’t so much about becoming anything. Maybe it’s about unbecoming everything that isn’t really you.”

Sometimes its the journey that teaches us a lot about our destination.

“Travel isn’t always pretty. It isn’t always comfortable. The journey changes you; it should change you. You take something with you. Hopefully, you leave something good behind.” – Anthony Bourdain

PrevPrevious“Once you have traveled, the voyage never ends, but is played out over and over again in the quietest chambers, that the mind can never break off from the journey.” -Pat Conroy
NextAdventure may hurt you but monotony will kill youNext