Its no secret that I have a lasting fondness for this series. I love how each character, especially Kenshin, finds their own happiness, meaning and path in life. I also love that fact that Kenshin is much older than your typical Shonen Jump hero. And, despite the past that burdens him, he continues on and is an example that the past doesn’t dictate where you are going, only where you have been. 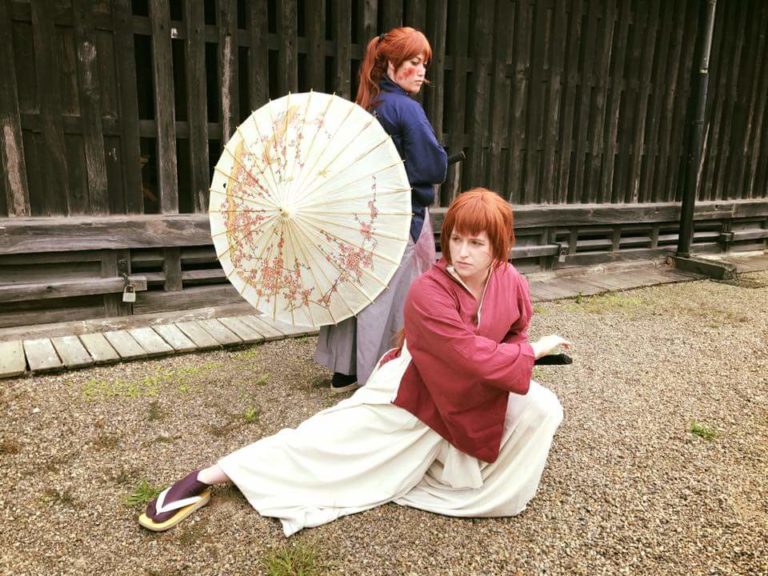 Let’s start with Battousai. That is the grey and blue version to those who aren’t familiar with the series. He is one of my first “official” cosplays. He was made under the supervision of my cosplay teacher, Garnet Runestar, and this costume has literally gone to hell and back over the years. My favorite part about this costume actually can’t be seen. Sewing him, I wanted his costume to not only be functional but to be period appropriate. From my Civil War reenactment, I once gifted a pack of original sewing needles from the 1860’s and I used that to do all of the period hand sewing on his clothing. The garments are made up of a wool gi, cotton undergarments and twill hakama. The obi is from my years of studying kendo and does function to hold the same katana I trained with. As for his blood effects, it happened in layers and is caked on over many years. Honestly, I don’t think I could get the blood out of the costume or wig if I wanted to. Between the dye, fake blood and some real blood, it’s not coming out.

Rurouni Kenshin, the pink and white version, also has hand sewing techniques in him. For his fabric, I spent an entire summer sun bleaching and weathering his fabric. Outside, in the rain, with awful soaps and bleach, I was adamant to age the fabric and have it feel threadbare. His gi and undergarments are cotton while the hakama are raw silk. I also aged the bottom of his hakama and then let out some grow tucks to show the physical growth that the character would have had over the years. Tabi socks for both character versions were also hand made.