Rise of the Guardians – Jack Frost

From “Rise of the Guardians” comes my favorite rendition of Jack Frost. I was immediately drawn to his character design and personality. He is definitely a cosplay I did for pure fun and enjoyment.

His challenge came with his hoodie. The frost look is delightful but almost impossible to pin down to a specific design or shape. Because of this, I decided to do my own interpretation of the frost designs as I added my own artistic flair. 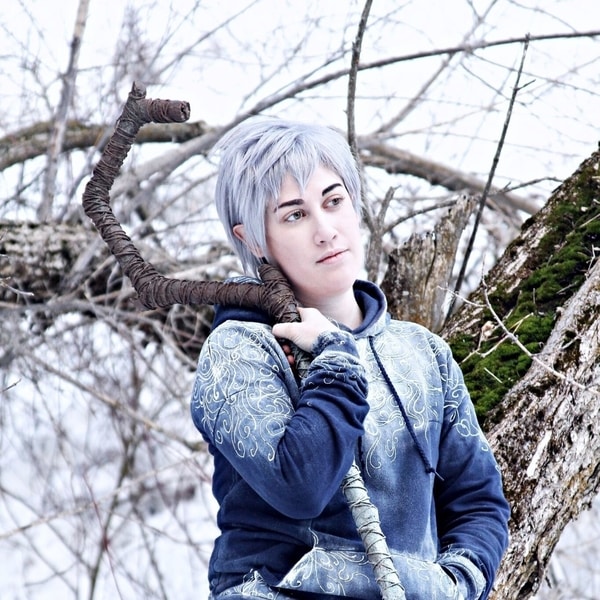 I started work by sewing the hoodie myself. He, for some bizarre reason, has very specific princess seams on his jacket and for accuracy, I was going to have those very specific seams. Once the hoodie was complete, the detailing began.

I started, originally, with a paint brush. Unfortunately the paint wasn’t going on as smooth and clean as I had hoped for and that idea was quickly abandoned. What took up that job was a small squeeze bottle used for piping on chocolate or icing details.

Little known fact about me, I am trained as a cake decorator and for Jack’s frost, I free handed all of the piping that is on the hoodie. The effect took forever to dry, but once it was completely firm, the details really stood out. Then, once the initial piping was dry, I went over the whole hoodie with a watered down white and glitter wash to give it that sparkle that frost has to it.

Jack’s photo shoot was also quite the experience. I tracked around in that snow barefoot for almost an hour to get those shots. My friend who came along as Elsa also INSISTED upon some Jack and Elsa paring shots.

While this never saw a convention floor or stage, his hoodie remains one of my favorite winter accessories and I still wear it for warmth, comfort and my own sick amusement.